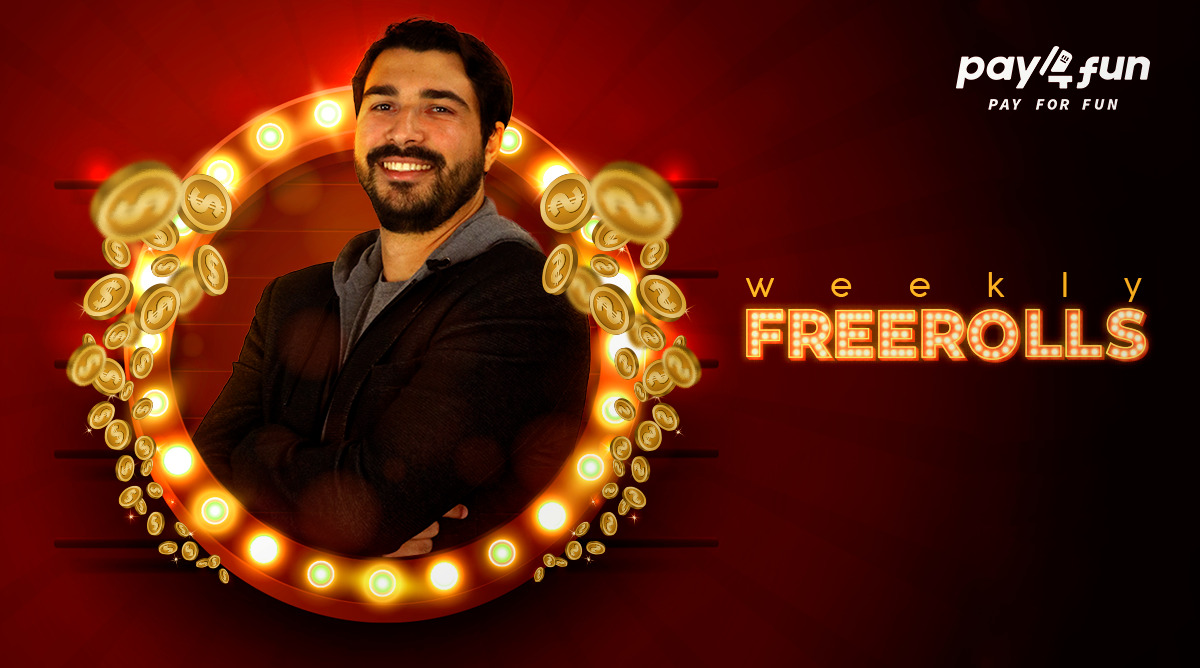 Now Pay4Fun is partnering with professional poker player Caio Bras. And you, Pay4Fun customer, can participate in the Pay4Fun and Caio Bras Freerolls on Twitch, on the Caio Brás channel, competing for free prizes. For those who don’t know, Freerolls are free tournaments that are worth real money prizes. Best of all, anyone over 18 can participate!

The first live, which will mark the launch of the “Caio Bras Series of Poker- CBSOP” Cup, will take place on October 15, 2021, and will feature the Opening Freeroll with R$1,0000 guaranteed prize pool + U$200.00 in tournament tickets, as well as ticket draws that will take place throughout the live. It starts at 5pm, and the Freeroll starts at 8pm.

To participate, you just need to open an account or be a Pay4Fun customer, have a real money account at Party Poker and be subscribed to the Caio Bras channel.

Check out the CBSOP Pay4Fun Opening Freeroll awards on Twitch, which will already be valid for the ranking:

All Freerolls will award points to the top nine finishers. In December, the CBSOP main event will take place, in which the members with the best ranking will participate, formed by the sum of the points obtained in each tournament played.

Scores will be given as follows:

Every Friday, starting on October 15th, there will be other Freerolls of the “Caio Bras Series of Poker – CBSOP, in partnership with Pay4Fun and Party Poker. In order to participate from this date onwards, it is necessary to open an account or be a Pay4Fun customer, and also be subscribed to the Caio Bras channel on Twitch.

Distribution of prizes from the other Cup Freerolls, which are also worth points for the ranking:

Lives will also start at 5pm, with the Freeroll starting at 8pm.

A key tip is to follow Caio Bras on Instagram, as new events and many new features for Pay4Fun customers will soon come.

The great champion Caio Bras, player and instructor of the Full Poker Team, started in the world of poker in 2015, playing recreationally and without in-depth knowledge about the game, as well as everyone who starts in this field.

He started his career playing the Sit & Go (SNG) modality, but in an undisciplined way, shooting in tournaments more expensive than he should have, but that served as a lesson for him not to make that kind of mistake in the future. After a long period of not being profitable in the game, after 2 and a half years, with 60,000 games being loss, he decided to take action that would change his poker life.

After investing in knowledge and changing his mind set in relation to the game, Caio Bras became a professional and started to have constant results, starting a trajectory of victories, resilience and overcoming difficulties.

He took the Inagame course in 2018, even stopping playing during this period, to focus on learning and absorb all the knowledge he could.

From then on, Caio Bras joined the SNG leaderboards in 2018 and 2019, the year in which he reached 1st place in the ranking of General SNG in Brazil and 1st place in the world in 9-player SNG, in addition to being world runner-up in MTT Low (WCOOP), even though his focus is on the Sits.

In the year 2020, he migrated to MTTs, looking for new challenges and in the same year he joined the Full Poker Team as a player. After a troubled but still profitable year, he gained experience in MTTs to have in 2021 the best year of his career, with $82,000 profit, until October, having an impressive consistency, even playing only MTT.

With that, in addition to being a player, he became an instructor for the Start Pro class, within the Full Poker Team, having the responsibility of training other great poker players, transmitting all his experience and knowledge acquired over 6 years dedicated to poker.

Caio Bras also started to create content on his social networks, such as YouTube and Instagram, in addition to creating a poker community on his Discord channel (Caio Bras Community) and his newest and most promising project on Twitch, which has already been drawing attention from everyone in the field because of their results achieved live and now, providing Freerolls and sweepstakes to all who watch and honor their live.

So, get ready: don’t miss the “Caio Bras Series of Poker” Cup – CBSOP, in partnership with Pay4Fun and Party Poker on Twitch and compete for many prizes without spending anything!