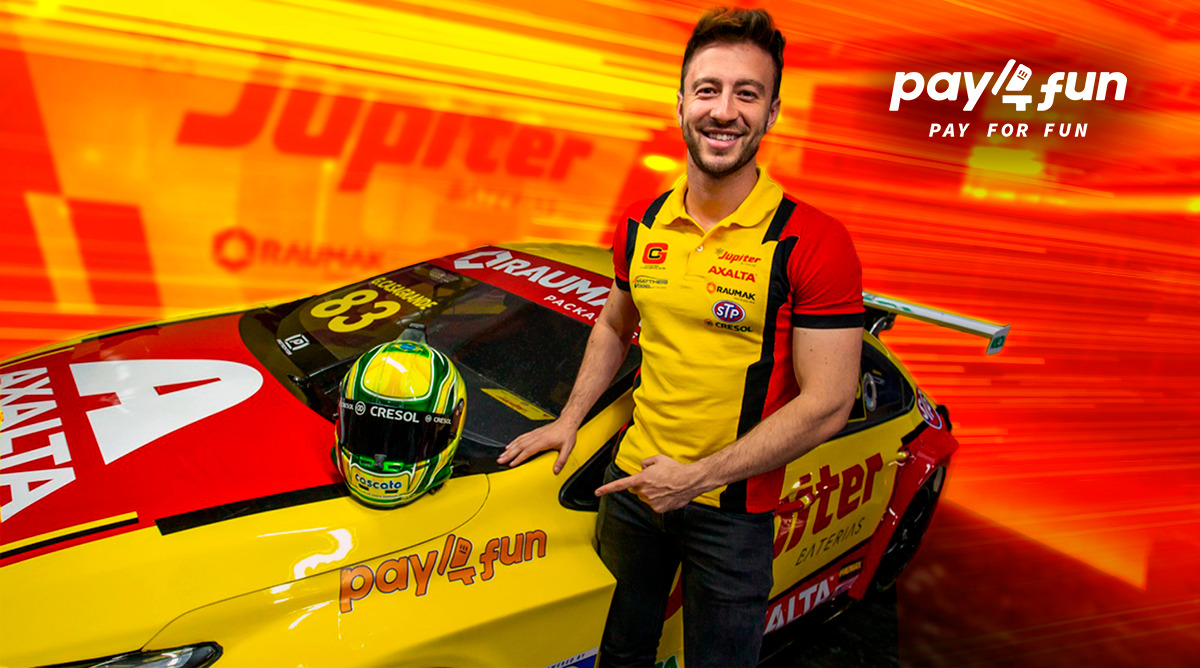 A new great partnership is stronger than ever. Pay4Fun is stamped on the front fender of car number #83, which belongs to driver Gabriel Casagrande from Stock Car and is in the lead of the championship, with only two races to go before the end of the season. The next stage of the competition takes place at the Autodromo de Santa Cruz do Sul – RS, on November 20th and 21st, 2021.

For Gabriel Casagrande, the partnership with Pay4Fun will be long lasting and very successful. “We are happy with this new partnership and also with the confidence in our work. Our dedication and effort have yielded great results on the track and we are extremely happy that Pay4Fun sees in Stock Car and our team a good platform for the exhibition of this great brand. May we have a long-lasting and very successful partnership.”

Gabriel Casagrande’s speed on the tracks has everything to do with Pay4Fun’s accelerated growth. Very happy with the new partnership, Pay4Fun CMO, Fabrício Murakami, talks about the synergy between Stock Car, Gabriel Casagrande and the company:

“We were born in the sports world and we have proven that motorsport and Stock Car in particular, have millions of loyal fans throughout Brazil. These people who know the sport and who vibrate in tune with the tracks make this segment extremely strategic within our plan Given all this, there was no other driver in the competition that had more synergy with Pay4Fun than Casagrande. He has our spirit of determination, of strategic agility and, like Pay4Fun, he has been growing race by race and surpassed with each new achievement! We are very excited about this partnership that is born on the tracks, but will certainly unfold in many actions”, concludes Murakami.

Discover all that Pay4Fun can offer you

Pay4Fun is an online financial transaction platform that allows you to make deposits, payments and transfers in a practical, fast and secure way. The company is 100% Brazilian but has commercial partners from all over the world.

Gabriel Casagrande and Pay4Fun are connected by the agility and competitiveness present in both their lives. If the pilot from Paraná has been showing dexterity and speed on the tracks, Pay4Fun brings in the digital environment the safest, fastest and most efficient solutions in financial transactions.

Facilitating the daily lives of consumers and merchants, through a simple and intuitive platform, Pay4Fun also promotes a differentiated service at all levels.

Pay4Fun offers the most varied products and services to simplify the life of its customers and business partners. These include Pay4Fun Card Mastercard, Pay4Fun App, Pay4Fun Store and Pay4Fun Go, a high-tech payment gateway that provides an easy and efficient way to conduct financial transactions.