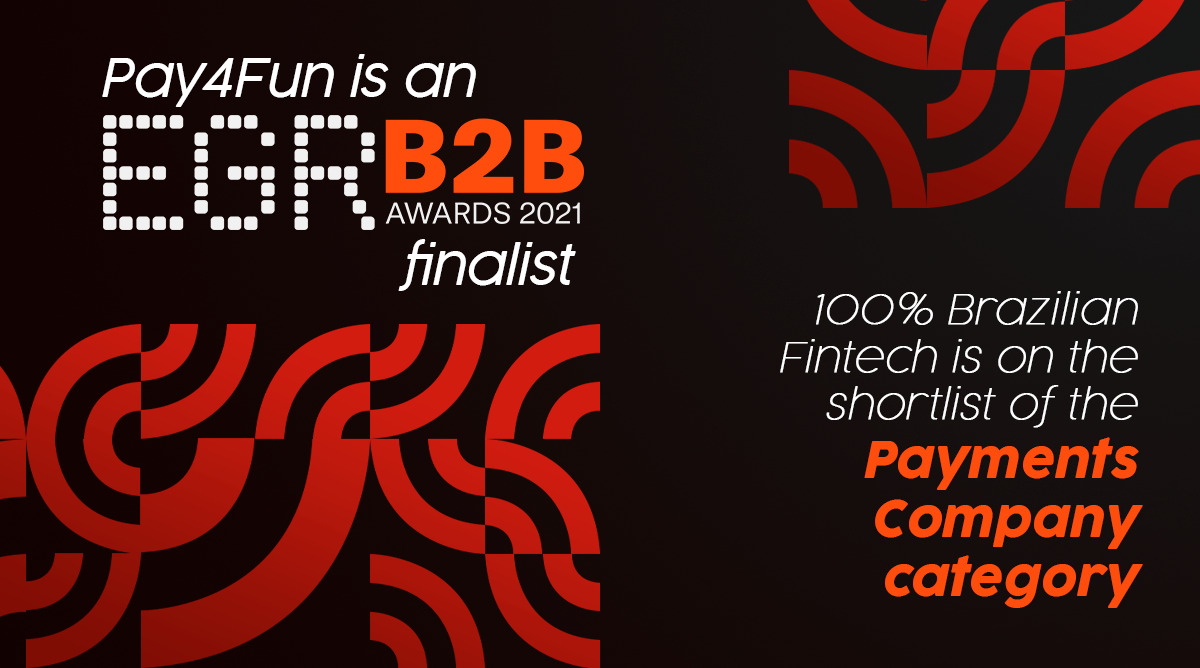 Pay4Fun was chosen as a finalist in the biggest award in the world of e-gaming market, the EGR B2B Awards 2021. The Brazilian company, specialized in financial transactions and e-Wallet, competes in the Payments Company category.

The event will take place on July 6 and 7, this time in a hybrid format. Fortunately, part of the world begins a reopening process, which will provide the EGR B2B Awards with offering participants the best of both worlds. There will be two days of virtual content, in addition to a face-to-face ceremony.

The event on the 6th will be 100% virtual. On the afternoon of the 7th, more award announcements will also be in the online format. However, on the second night of the EGR Awards, the exclusive live ceremony will take place at York Lawns in Regents Park, London, UK.

The EGR B2B Awards will provide a high quality experience for both virtual and in-person participants, being in full compliance with current government guidelines.

This is the third year that Pay4Fun has been nominated as a finalist in the EGR B2B Awards. The company was also featured in the 2020 and 2019 shortlists, making Brazilian participation increasingly comprehensive and important in the world of technology and payment methods.

Understand how the EGR B2B Awards will work

Although the situation in the Covid pandemic19 is more positive in part of the world, the EGR Awards still firmly consider security protocols.

Thus, the event will not have a live trial. The EGR Awards 2021 has an external judging panel, aligned with all the specific knowledge of the market, valuing the total absence of conflict of interest.

EGR’s team of external judges is independent and updated each year. The team of judges brings a diverse range of expertise in e-gaming so that the choice process is one of excellence.

In addition, the voting process of the EGR B2B Awards is made official by the accounting giant Deloitte, which makes the award the most rigorous in the gaming market. This demonstrates the importance of Pay4Fun’s presence in this shortlist.

EGR Global, organizer of the event, is the largest publisher in the gaming industry on the planet. It is also the most important source of news, analysis and opinions in the e-gaming industry.

EGR publications are great references in information for the entire market. EGR is responsible for the only title in the gaming area aimed at the B2B audience. The company has renowned brands such as EGR Intel, EGR Technology, EGR Compliance, EGR Marketing and EGR North America.

To celebrate even more the nomination for the EGR B2B Awards 2021, Pay4Fun celebrates its 3 year anniversary in the month of May.

Could not be better. Today, the company has more than 150 integrated business partners, in addition to a rapidly expanding customer base. And all of this is just the beginning.

Every day, Pay4Fun expands and improves its services and products. Today the company has facilities such as Pay4Fun App, Pay4Fun Card Mastercard and Pay4Fun Store, providing much more convenience to its customers and partners.

Pay4Fun’s differential is to offer high technology combined with excellent humanized service. This is our constant goal.