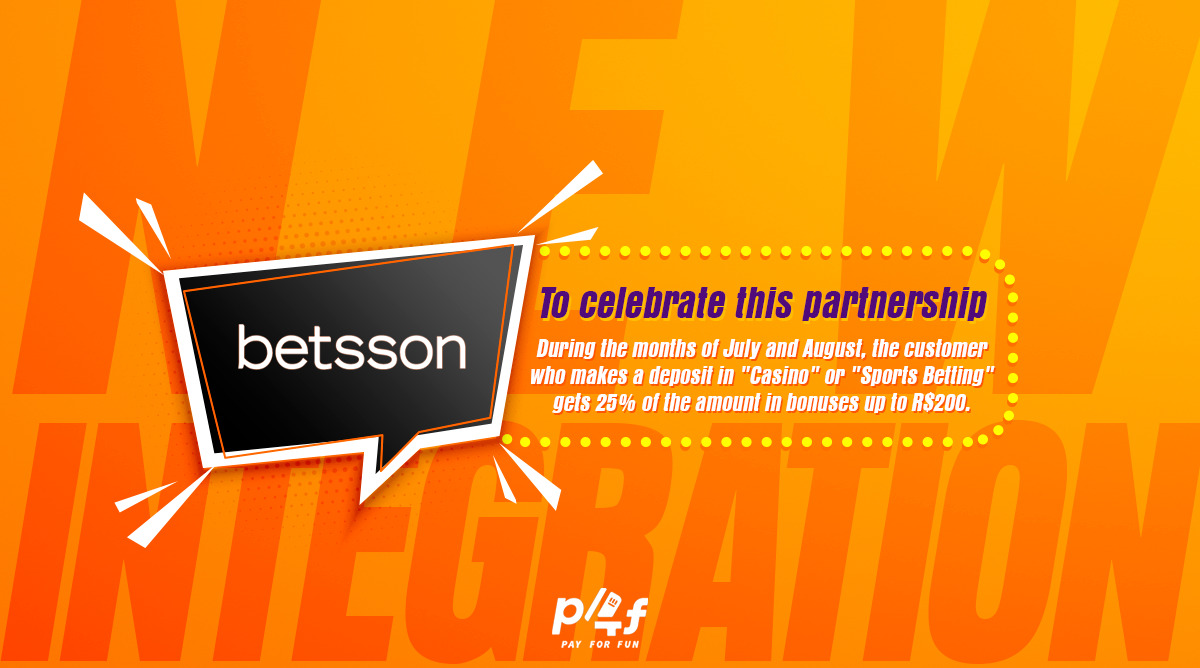 Brazilians now have another safe and innovative option to place their bets online: starting today, Betsson users will be able to use the Pay4Fun platform. With the mission to facilitate consumers’ daily lives, the company offers a virtual wallet, where payments and transfers to accredited sites are made in a simple and non-bureaucratic way.

Betsson brand is part of BetssonGroup, one of the largest online gambling references in the world. The betsson.com website offers a wide selection of sports betting odds that can be placed before the game starts or through live betting. If the bettor does not want to wait until the end of the game, he can use the cashout function and receive his winnings on the spot.

“Betsson’s focus is to offer quality entertainment, with security, always thinking about our customers’ well-being,” says Andrea Rossi, Betsson’s commercial director for Southern Europe and Latin America. “The Pay4Fun product is practical, efficient and proved to be very safe. I am sure it will be a long term partnership”, he declares.

To celebrate this partnership, Betsson launches an exclusive promotion for players who choose Pay4Fun as payment method. During the months of July and August, the customer who makes a deposit in “Casino” or “Sports Betting” gets 25% of the amount in bonuses up to R$200.

Full catalog and a large number of promotions

At Betsson, users have access to the world’s biggest soccer events such as Copa Libertadores, CONMEBOL Qualifiers, Europe’s top leagues as well as many other sports such as tennis, basketball, baseball, boxing, Formula 1, American soccer, and others.

The virtual sports catalog is also filled with the best options in the market such as Counter Strike 2, League of Legends, Dota 2, Call of Duty, and more. The casino is another highlight of the Betsson platform. The site has more than 1,000 slots options, as well as a live casino, bringing the real casino experience right into the player’s home.

On Betsson’s platform, the customer always finds good promotions. One of them is the sports betting welcome bonus, which offers a 100% bonus up to R$ 240. The player will have access to bets on the Brazilian Soccer Championship, state championships, the best leagues in Europe, the NBA, and much more.

Another exclusive promotion is Betsson’s Hexa Millionaire. To participate, one must bet R$150 on any sport with odds of 1.50 or higher. At the beginning, the player receives R$6,000,000. You can split the amount or bet everything on one answer. Once a question has been answered, any amount placed on the winning answer will go to the next question. Any money left in the pot after all 20 questions have been answered is the player’s and can be credited to their account.

On the promotions page you can find several other options, like the surprise prize and welcome bonus of Casino, Card Collector, Twister Races, Poker Loyalty Program, and much more.

Pay4Fun currently has more than 160 integrated partners, making Brazil a large and promising market for the gaming industry. Besides a lot of fun and excitement, the Brazilian gambler is interested in technology, security and excellent service. That is why Pay4Fun grows every day.

Pay4Fun enables financial transactions with all the speed and safety. It also provides the movement of values through PIX, an innovative technology created by the Central Bank of Brazil.

Recently, the company launched Pay4Fun Go, a payment gateway that facilitates financial transactions for users and merchants. Other products such as the Pay4Fun App, Pay4Fun Card Mastercard, and Pay4Fun Store, make Pay4Fun essential for our customers and business partners to have the best experience possible.

In addition, Pay4Fun offers a human and attentive customer service, which makes our company a committed and differentiated option.

With more than 20 brands in the portfolio, including Betsafe.com, Betsson.com, NordicBet.com and CasinoEuro, the Swedish Betsson Group is one of the world’s leading online gambling groups, delivering entertainment and fun for more than five decades. Want to learn more? Go to: www.betsson.com/br