Pay4Fun is a finalist for the EGR B2B Awards 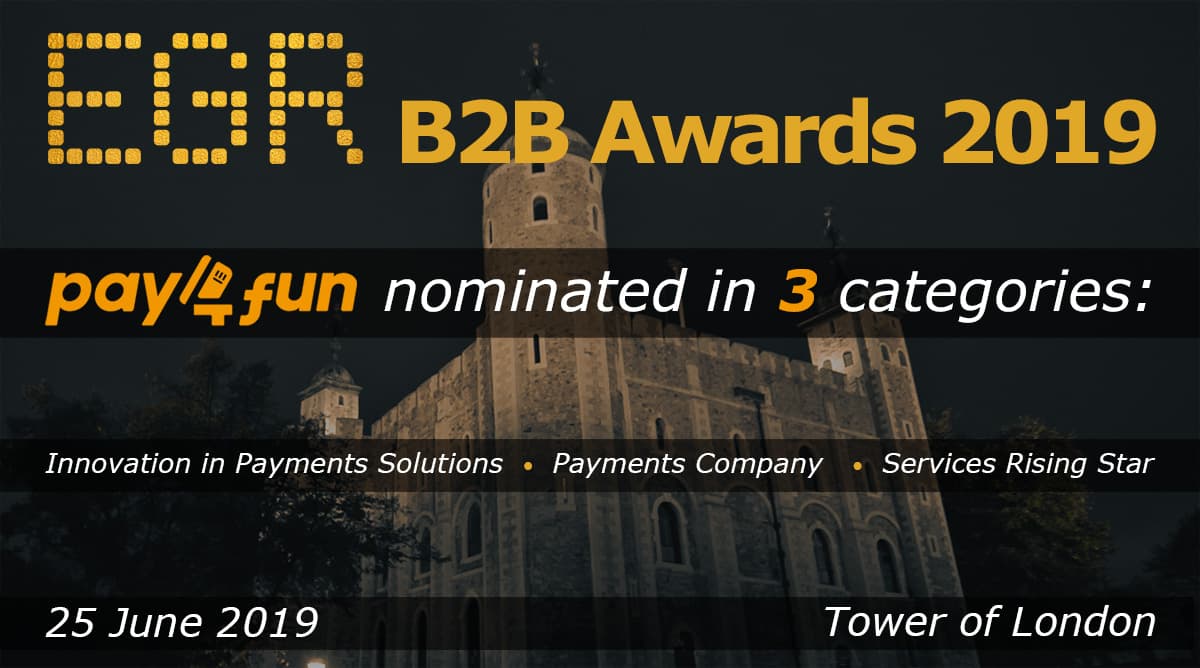 Pay4Fun is listed on the EGR B2B Awards finalist list. The EGR event is the largest and most important award ceremony in the gaming industry in the world.

EGR Global (eGaming Review) is the world’s leading B2B publisher and membership networking group for the online gaming industry. It is also the largest source of news, analysis and opinions in the egaming industry. Its publications are a reference for information and panoramas of the market, also providing materials and interviews with the most influential personalities in the sector.

The EGR is responsible for the only monthly publication in the area of ​​gaming targeted at the B2B public. Its main site is EGR Intel, but the company also owns the brands EGR Technology, EGR Compliance, EGR Marketing and EGR North America.

The awards ceremony will take place on July 25, 2019, in England, at the Tower of London.

The EGR B2B Awards represents a key reward to the best service providers in the online gaming industry. The event encompasses various sectors and vendors in the area of ​​egaming, including gaming and betting software, mobile, payments, recruitment, IT and infrastructure.

Founded in Brazil in the year 2017, Pay4Fun has a fast and fundamental history in the gaming market in the country. The company came about because of the difficulty Brazilian gamers faced in placing their bets on international sites.

Until last year, any and all activity in the area could not be based in the country. For this reason, the Brazilian gaming market is still new and practically unexplored.

However, at the end of 2018, Law 13756/18 was enacted, which creates the sports betting modality in Brazil. This is the first big step towards full legalization of sports betting in the country.

Foreseeing the expansion of the Brazilian gaming market, Pay4Fun took the lead. It is the first regulated Fintech in Brazil in operation and is dedicated mainly to this segment.

P4F already has partnerships with several world-wide operators, and is quite confident in the development of the country’s market. Among partners are 188Bet and 1XBet. Pay4Fun operates without intermediaries. Thus, the operator is free of chargeback risk through automated API payout.

With P4F, Brazilian players are also very excited to bet more. The company is 100% Brazilian, founded and based in the country. It offers 24/7 support in Portuguese and allows the gamers to use their local means of payment safely and securely.

With the new legislation, both the gaming market and the tourism market are optimistic. The goal is for casinos to be installed in hotels and resorts in the country.

Major world players in the industry have also made constant visits to Brazilian congress representatives. Companies like MGM Resorts, Sands and Caesars Entertainment are frequently sending their executives to the country to accompany the pace of the market opening.

In addition to all the grandeur and importance of the event, the EGR B2B Awards will have the entire voting process audited by the accounting giant Deloitte.

This ensures that the judgment process is completely transparent. The winners can count on an award of real credibility, which proves all the competence and merit of each of the winners.

All of Brazil is cheering for Pay4Fun. We hope that the great success of this innovative and pioneering company can further fuel the gaming market in Latin America’s biggest country.